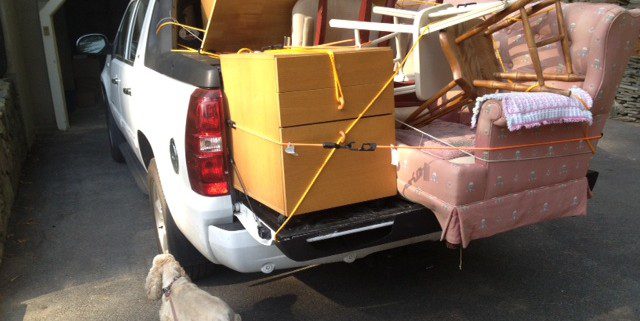 Our story begins with a last minute question from Bruce Frankel as he was wrapping up his manuscript for his book What Should I Do with the Rest of My Life?

You and Barbara became the masters of the art of lifting. Is there any way you can describe what that entailed?  How would you complete a sentence that began, “We learned to ….” to describe some of what you learned about lifting?

We learned to think first and stay focused when lifting heavy things such as a sofa bed.  We stand on either side, use our legs and keep our backs straight.  Actually, the sofa feels lighter when picked up in the middle – and we don’t have to twist our bodies getting it on the truck.  Dressers, washers, dryers, etc., are easier to carry when tipped diagonally thus leaving our backs straight and space for walking. Many of our male volunteers do it the hard way by picking it up by the ends.  The women are smarter.

The Story of the Levitated Sofa

But there’s more to the story than Barb’s reply, as Ira explains. It’s a story about the “levitated sofa.” It is a great lesson in lifting.

Some years ago Barb and I were called to the home of a retired Fire Chief who had just moved into assisted living. His friend, Richard, who summoned us, was there to help us remove the furniture. Near the end of the day, we were dead tired, and there remained a heavy sofa in the cellar. We had to bring it up a steep, narrow stairway into the kitchen and out the back door.

Richard and I took a deep breath, removed the cushions, turned the sofa upside down and proceeded to carry it up the stairs. We were struggling, me pulling and him pushing. Then the sofa became weightless and I, surprised, looked down at Richard who was equally surprised. All we had to do was steer it. As we entered the kitchen, a small voice from underneath the sofa said, “It’s OK now, you can let me out.”

Out crawled Barbara, who had been hunched underneath lifting the sofa on her back.

Throw in the Towel

Why Donate Your Couch? Your Tables and Chairs? Your Kitchen Items?
Scroll to top