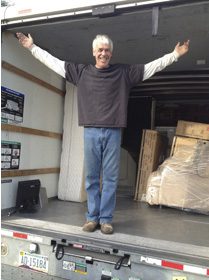 Allan is a Veteran of the Gulf War.  During his time in Iraq, Allan experienced many of the traumas that so many service members do, leading to a diagnosis of Post Traumatic Stress Disorder and Gulf War Syndrome. After leaving the Army, he struggled to deal with the traumas he experienced during his service.  Allan found himself moving from place to place, ultimately finding himself homeless and struggling with addiction. Thanks to Allan’s participation in VA programs and his sheer determination, he made great progress in his recovery. Despite the fact that he was ready to be independent, however, Allan still needed a permanent home.

Allan was referred by his VA doctor to the HUD-Veterans Affairs Supportive Housing Program (HUD-VASH), which works to move Veterans and their families out of homelessness and into permanent housing.  HUD provides Housing Choice Vouchers that allow homeless Veterans to rent privately owned housing while the VA provides ongoing clinical and supportive services.  Allan was thrilled in late August to find out that he had been approved for a housing voucher.  He has recently settled into his own apartment in the Massachusetts town where he grew up and where he has a community of friends and family to surround him.

A Couch That Reclines

Although Allan finally had a place to live, he had no furnishings to make it a home.  Father Bills and Mainspring, an organization that works with the VA to support Veterans in finding housing, referred Allan to Household Goods. Then, very early one morning, Allan came to Household Goods and got everything that he needed for his new home, including bedroom furniture, a television, couch, table and chairs, and all sorts of kitchen supplies. Allan especially loves the couch, saying “It reclines and everything!”

Allan has fought tooth and nail for independence. He feels so lucky to have his own home, saying, “Now I have an address.”  Before he had an address, Allan often cancelled medical appointments.  Not because he did not see the need to go; in fact he knew how important the visits were, but because he felt he was unable to do basic things such as shower and put on clean clothes before seeing his doctors.  Allan says that having his own home anchors him.  In the past, when feelings of stress and anxiety were high for him, he might have taken off.  Now that he has a home, he feels more stable and responsible.  He is able to rebuild relationships with family members now that his home is a place where they can be together.  Allan is thankful that the support from the VA programs and the very tangible support from Household Goods have given him the anchor he needed.

Many of the 3,000 families Household Goods helps each year are Veterans. We work closely with the VA and many social service agencies across Massachusetts whose goal is to help Veterans get back on their feet. We supply these Veterans with the furniture and household goods they need to make the new apartments that our partner agencies find for them into a home.  “Our Veterans have given so much; Household Goods is proud to do our part in making sure they have a home,” said Sharon Martens, Executive Director.